The Pamplona City Council has chosen TSO’s ultralight panel to install a photovoltaic plant for self-consumption on the new sustainable roof of the Public Safety building, where the Municipal Police is located. The project has been carried out by Construcciones Leache, S. L. with an investment of 197,169 Euros.

This construction company has provided the Public Safety building in Pamplona with a modular roof made of wood from sustainable forests, in which they are integrated 266 ultralight flexible solar panels, which are exclusive products of the Sevillian company TSO, The South Oracle.

The photovoltaic plant of about 80 kW, with an estimated production of 95 MWh per year, will cover up to 20% of the energy consumed by the building. In terms of aesthetics, TSO has guaranteed a zero-visual impact with the total integration of their ultralight panels on the new sustainable roof. This is possible thanks to the technical features of these exclusive solar panels, which are flexible, glassfree, weigh less than 5 kilos and can be customized and adapted to any surface, reducing the installation time by up to 70% compared to that used in photovoltaic installations with conventional panels.

For this project, the ultralight TSO panel selected has no profile, has its junction box on the front and is composed by 60 monocrystalline cells, giving it a maximum power of 290 watts. The photovoltaic plant is made up of 38 rows of seven panels each, all of them bonded with a special polymer along a 900 square meters surface. This roof is supported and fixed on the existing one, serving also as waterproofing and improving the thermal insulation of the building. It is a ‘2 in 1’ system called ‘plug and play’ (roof plus photovoltaic installation) connected to the building’s interior network.

The electrical connection of these panels also presents an innovative solution. It has been integrated into a smart micro-network in the same building using BeePlanet’s reused second life battery storage, V2G technology charging posts for municipal electric vehicles and micro-network control technology developed by CENER. All this action is part of the European Horizon 2020 project called Stardust, to which the Pamplona City Council is a partner.

Furthermore, the Sevillian company TSO is a pioneer in the participation of photovoltaic integration projects in surfaces, buildings or existing structures. Some examples of this are the photovoltaic solar plant integrated in the carports of the Emirates Towers parking lot in Dubai and in the façade of Tower 2 in Seville, being this latter the first architectural integration in an existing façade in Europe. 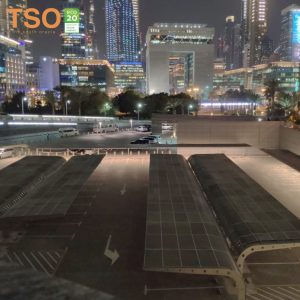