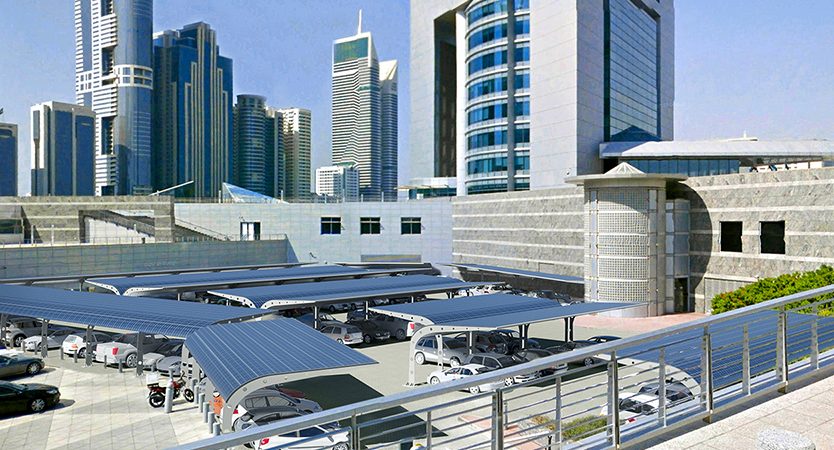 The South Oracle, TSO, andalusian company leading the PV solar energy sector, will be responsible for the renewable energy supply to the Emirates Towers, a symbol of the city of Dubai.

The solar PV plant, based on the PSFU (eArche®) technology, will be integrated on the existing carport in the towers parking, which has a capacity for about two thousand vehicles. Thanks to our PSFU, ultralight flexible solar panel, TSO transforms any surface into a solar generator without altering the existing structure.

In the same way, the Emirates Towers parking will become a photovoltaic solar power plant, with no visual impact, that will annually produce 282 KWh of green electricity. This means about 169 tonnes less CO2 emissions per year, equivalent to planting 9,400 trees. This innovative proyject, exclusively designed by TSO, is a proposal of Etihad ESCO, public company founded in 2013 by DEWA (Dubai Electricity and Water Authority). Among DEWA’s objectives is the aim to increase energy efficiency measures in Dubai, to become one of the most sustainable cities in the world.

Therefore Etihad ESCO has opted for the experience and innovation capacity of TSO, The South Oracle, reference company in the photovoltaic solar power world, and first European company to desig and develop an architectural PV integration on existing facade with its exclusive solar panel, PSFU (EArche ®). This system has converted “Tower 2” building façade, at Seville’s Torneo Business Centre, into a self-consumption solar power plant.